Warning: mysql_real_escape_string(): A link to the server could not be established in /home/content/06/6280006/html/daily-india-live.com/wp-content/plugins/easy-contact-forms/easy-contact-forms-database.php on line 182
 Furnish proof to Kejriwal, Congress & others that Indian Soldier is Killed, mutilated. – India – Daily: Live & Rare
Tweet 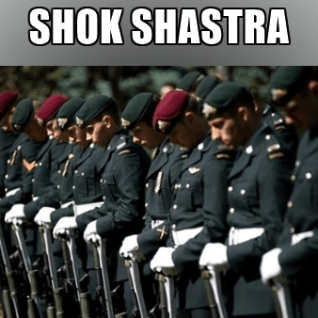 Just a few minutes ago, I got a news that a soldier from 17 Sikh Regiment was killed and his dead body was mutilated badly same as they did in 2013 with Lance Naik Hemraj Singh and Lance Naik Sudhakar Singh from Indian Army. It would be pertinent to mention that no such deed of Pakistani coward Army will go unpunished. In fact they will get it with interest. However, this post is for all those Indian Cowards who doubt the caliber of Indian Army and Indian Administration.

I would like to ask Arvind Kejriwal, Sanjay Nirupam, Digvijay Singh, Anand Sharma, Rahul Gandhi  and all others, those who were asking for proof of “Surgical Strikes by Indian Army” in the past, do they believe that this news is true and that one of our brave soldier was injured during the patrol and then was killed and mutilated by Pakistani Army (claimed as terrorist), because this news as well is provided by Indian Army as it did about “Surgical Strikes” or do they still need the proof whether Pakistani army has mutilated one of our dead soldier’s body. If they do, then dare once again to air a video or do a press conference. And if you believe the words of Indian Army this time, then “SAY SORRY” for what you did in the past.

And yes, no matter whether Pakistan claims that it was its “Non State” actors, this type of action cannot be done by a half- baked, quasi-trained militants. It definitely is done by the Pakistani Regulars since in past 3 days Indian Border Security Forces Snipers killed more than 15 of Pakistani rangers which of course is Pakistan denied as they did about its regular soldiers killed in Kargil war and the world famous OBL was found in Pakistan and still Pakistan remained in continued denial mode.

It is a matter of pride for a soldier to die in the line of duty but there is a respect for the Martyr that his countrymen ought to have and then it is a duty of “MEN” of his country and a debt on the shoulders of martyrs’ fellow countrymen to take revenge and that too with interest. This, in a democratic set-up becomes the duty of the then ruling government as it was done by Modi Government on 28 Sept. 2016. I am confident that Indian Army is more than capable to avenge and take revenge however I would like to ask Mr. Kejriwal , Congress and all others who were looking for proofs whether the word from Indian Army would be enough for them this time or do they still plan to seek proofs that our soldiers have avenged this barbarian act of Pakistani Army because if they still do have any such wish of asking for proofs, I would request Indian Army to send all of them along with the troops which are going to avenge this act but the rule of the game would be “every man for himself” since this is what they know. They (Kejriwal, congress and proof seeking party) do not believe in ‘you watch my back, i watch yours’ so for them the rule of Indian army would not be applied. And if required, they can be left behind since they have a habit of not following the rules which is in total contrast with how Indian Army lives.

I also would like to dare Mr. Kejriwal & all other proof seekers, to at least visit the family of this Martyr from 17 Punjab regiment. You will be hitting two birds with one stone. Prima Facie this soldier should be from Panjab where elections are approaching so you can do canvassing & your nationalism will get a new high as you will get ample coverage in the “Krantikari Media” & “Designer” journalists will pose you as a hero as if you have avenged the death of this soldier which i am sure you cannot even dream of.

Of course, I am angry and why should I or as a matter of fact any INDIAN be  Sad.