Warning: mysql_real_escape_string(): A link to the server could not be established in /home/content/06/6280006/html/daily-india-live.com/wp-content/plugins/easy-contact-forms/easy-contact-forms-database.php on line 182
 Bollywood Actor Salman’s Kick- Rs 75 crores – India – Daily: Live & Rare
Tweet

The huge success of Dabangg not only proved a big boost for the debutant Sonakshi Sinha as the heroine, but it also proved a big boost for the career of Salman Khan as some of his last movies like Veer proved a big flop on the boxoffice and failed to cater the interest of audions too. But movies like Wanted and especially Dabangg proved to be a huge boost to the sinking career of Salman Khan. However, Dabangg ‘s record breaking performance on the box-office has really given a new shape to Salman Khan’s career, besides also catered the interests of the producers and directors in the ability of Salman Khan. However, as a result of this on screen chemistry of Salman and Sonakshi appealed not only to the audions, but also appealed to the directors and soon we will see this couple again in their in its next venture “KIck”

“Dabangg” Salman Khan and Sonakshi Sinha’s Next Venture Is “Kick”

Audions will get another chance to see the on screen chemistry of Sonakshi and Salman Khan, next year during EID days in their next venture Kick. However, there is a huge time gap between now and then, so time will see that this hot couple can remain same hot till then or not. But really Salman’s and Sonakshi’s onscreen chemistry really catered the interest of audions and proved helpful in the success of the movie. However, it has become talk of the town that this couple’s recent success will fetch them how much in their coming ventures.

However, recent success of Dabangg has benefited Nadiawala the most. He is in the air after the record breaking performance of the Dabangg, and hopes that their next venture Kick can repeat this performance again. However, such talks are also in the air in bollywood that Sajid Nadiawla has demanded Rs.75 crores from Eros Entertainment for Dabangg couple’s next venture Kick. However, it’s not confirmed that whether its reality or just a rumor in the air. However, Nadiawala has denied of any such demand and he told that the talks of budget of the movie have not yet discussed and all such talks are rumor. However, it must also be noteworthy that two of the earlier movies of Salman Khan Veer and Dabangg were also under Eros Entertainment. However, the former failed to cater the interest of the audions, on the other hand the latter proved to be the biggest grocer of the bollywood that broke all the records.

However, success of Dabangg broke many records. Even it is not wrong to say that it broke all the records of the movies prior to it and emerged to be the biggest opening and biggest weekend grosser of the bollywood. It even break the record of the Amir Khan’s 3Idiot which grossed an amount of Rs 41crores in the first week, where as Salman Khan’s Dabangg surpassed it with grossing an amount of Rs 47 crores in its very first week making it the biggest hit of the bollywood. However, the team of the upcoming movie Kick expects to have same venture from Kick as Dabangg has given. But the time will tell what will be the results. But really it is expected that Dabangg duo of Salman and Sonakshi is expected to once again cater the interest of the audions in their forth coming venture Kick. 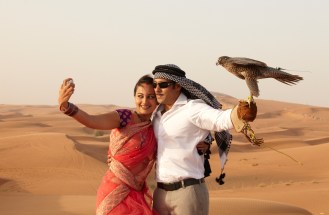 Salman Khan and Sajid Nadiawala are earlier involved in many ventures such as Mujh Se Shadi Karoge, God Tussi Great Ho and recently duo of Sajid and Salman are involved in the venture of Jaan-e-Mann just four years back and movie did good business on the boxoffice. Earlier ventures are though mixture of success and failure. As if Mujh Se Shadi Karogi if proved successful, then God Tussi Great Ho was a big failure.

However, the recent blockbuster success of Dabangg has arisen the hopes a successful venture from their forth coming movie Kick expected to be ready to release by the EID next year.

Rs75 Crores A Big Amount To Venture With

No doubt, Salman’s recent success in the movie Dabangg has proved beneficial for the Eros Entertainment as it has broken all the earlier records, but still Rs 75 crores is a big sum to venture with, and Eros has to take serious concerns before taking into consideration such a huge amount. However, there is no doubt in the fact that earlier two movies of Salman are also with Eros Entertainment, one is Veer and the other is Dabangg. However, if Dabangg brought huge benefits to the company, then from Veer, company has to suffer heavy losses. So, the balance can shift on either side. But, however, Sajid Nadiawala has given the clear cut instructions that he will give the movie only if he will be given the amount demanded by him. However, Both Salman and Sajid are very close to Eros, so whatever be the situation , it will be clear soon.

Salman- Sonakshi The Hottest Couple Of The Bolloywood

Really after Dabangg’s breath taking success, the thing that catered the interest of the audions is the on screen chemistry of Salman and Sonakshi. Both have become the hottest couple of the town. It is expected that couple will have more ventures together. Their forthcoming venture is Kick, expected to be release on EID next year. Hope that the movie will repeat the success of Dabangg once again.