Warning: mysql_real_escape_string(): A link to the server could not be established in /home/content/06/6280006/html/daily-india-live.com/wp-content/plugins/easy-contact-forms/easy-contact-forms-database.php on line 182
 Didier Drogba Will Play Against Brazil – India – Daily: Live & Rare
Tweet

Didier Drogba will play: There is good news for Ivory coast that there is hope that its one of the best striker who was injured will be played in the upcoming matches. Despite of his fractured arm, the trainer of Ivory coast gave hint that he will play in the upcoming match of Ivory coast against Brazil This provide a great relief to the team and definitely they regain their strength to win this match. The football federation of Ivory coast hinted that if anyone see Didier Drogba in the next match, then there is no need to be shocked. There is no surprise that he will play the match. We are happy that he is able to play the match. 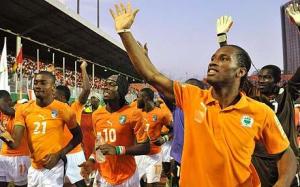 Erikkson praises Didier Drogba: The world trainer Eriksson said that his contribution against Portugal is
unmatchable. He said those 25 minutes were most valuable in that entire match. He mentioned that Drogba followed a fast recovery. His arm was fractured during a friendly match with Japan. He is one of the important players of the team and definitely his come back in the team make the team happy. The entire team is glad to know that his health has improved. This will not only improves the team strength but also provide confidence to the team. Also it is required that he must play in this match because on Sunday, the Ivory coast is going to face the world’s number one ranked team Brazil in second game. So presence of him in the team provide not only moral support but also keep them confident about the game. Eriksson said undoubtedly, Brazil is one of the best teams in the world, and i respect that team but as the Ivory coast performed against Portugal, that are showing some positive signs about the victory of the team.

Playing against Brazil- not an easy task: Eriksson admitted that playing against Brazil is not an easy task and the match is going to be a difficult but after the performance of Ivory coast against Portugal, it is expecting that this team will definitely produce some surprise to the world and Brazil team. We all are hoping that they will rock in the field. The ivory coast worked hard for this match and will try to put their maximum efforts to win this match. About Didier Drogba, he said he is one of the finest player of the team and the entire team is relied on him at some extent. His presence in the team matters for the entire team. The coach and the trainer of the team also said that he is so hard worker and never take any risk. He believes in victory and this is the only thing which make him so strong and powerful. Well what will happen exactly, it will be known after the match only so right now best wishes to both the teams for their match. Hope it will be an exciting and interesting match and people will enjoy the match.